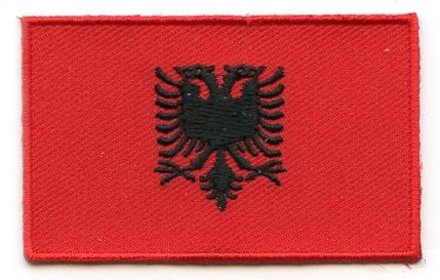 The Albanian flag consists of a black, two headed eagle in the center of the red base.

Meaning: The eagle is taken from an Albanian folk tale. The eagle faithfully watches over and guides the king or the "son of the eagle."

History: The current version of the Albania flag was adopted on April 7th 1992. The coat of arms was adopted May 22nd, 1993. Some modern versions of the Albania flag have a helmet or star above the eagle. A version of the Albanian flag with a red star and a yellow border dates back to the Communist takeover in 1946 and has recently been removed. The eagle dates back to George Castriota, an Albanian Christian who became a Turkish general in the 15th century under the name of Iskander Bey, or Skanderberg. Castriota used the double-headed eagle on his seals and this has led it to being on the modern flag. Albania declared independence from the Ottoman Empire in 1912. All versions of the Albanian flag since then have featured an eagle, even during the Italian occupation of World War II, and its communist regime after the war. Albania became a republic again in 1992.