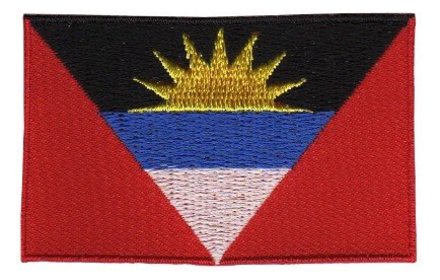 The Antigua and Barbuda flag is designed on a red base with an upside down pyramid shaped emblem in the middle. The bottom third of the pyramid is white, the middle blue and the top is black. Sitting in the bottom of the black area is a half of a 16-pointed yellow star/sun symbol.

Interesting Facts: The current flag was designed by a high school art teacher in Antigua and Barbuda. (source: worldflags101)