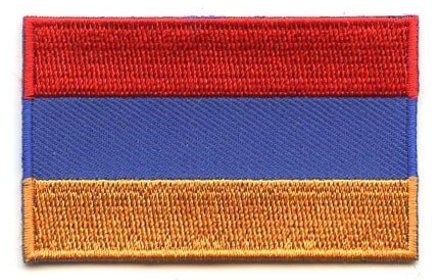 The Armenian flag consists of three equal sized horizontal stripes - the top stripe is red, the middle one blue and the bottom stripe is orange.

Meaning: There are conflicting views on the meaning of the Armenian flag's colors. The most recognized meaning of the Armenian flag is that the red symbolizes the blood spilt by Armenian soldiers in defense of their country; the orange symbolizes the fertile soil and the farmers that work on it; and the blue represents the sky. Another theory states that the colors mean: red - the sun's energy; blue - the clear sky; and orange - the wheat at harvest.

History: Armenia's official flag was created after the First World War between 1918 and 1921, after Armenia gained independence and was readopted on Aug. 24th 1990, just before gaining independence from the Soviet Union in 1991. When Armenia was controlled by the Soviet Union it went through a few flag changes and its flags had Soviet emblems on them.

Interesting Facts: The Armenian flag is said to be karmir, kappoyt, narndjagooyn, an eastern Armenian pronunciation, which translates exactly into "red, blue, and orange." (source: worldflags101)