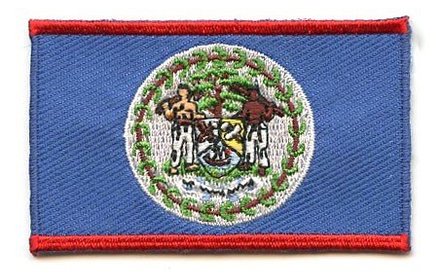 Meaning: On the white circle is an inner green circle consisting of 50 olive leaves. The 50 leaves represent the year 1950, which was when Belize, which was formerly known as British Honduras, began its quest for independence from Britain. The country was renamed Belize in June of 1973. When independence was realized, the two red stripes were added to the country's previous flag. The Belize flag represents the unity of the nation's people.

History: The present day Belize flag was adopted on September 21, 1981, after Belize gained independence from Britain. The previous Belize flag, without the red stripes, was adopted in 1950. Belize has been a self governing country since 1964.