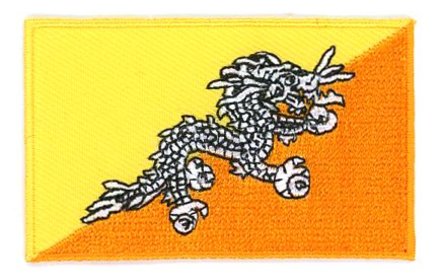 The flag of Bhutan is separated in two halves diagonally. The upper left half is orange/ yellow and the lower right half is orange. There is en emblem of a white dragon in the middle of the Bhutan flag facing to the right.

Meaning: The dragon on the Bhutan flag is white to symbolize purity. The dragon is holding jewels in its claws and these represent wealth. The snarling mouth of the dragon represents the strength of the people protecting the country. The colors of the Bhutan flag represent spiritual and temporal power within the country. The orange represents the Drukpas monasteries and Buddhist religion, and the orange/ yellow symbolizes the secular authority of the dynasty.

History: This version of the Bhutan flag was adopted in 1969. The country's name in local dialect means Land of the Dragon. In Bhutan thunder is believed to be the sound of dragons roaring. Around 1200 a monastery was built called the Druk (Thunder Dragon) with a sect called the Drukpas, named after it. Ever since then the name and emblem of the dragon have been associated with Bhutan. The country gained its independence from India on Aug. 8, 1949.

Interesting Facts: The flag of Bhutan has been in use since the middle of the 19th century. The form of the dragon was altered a little in the beginning of the 1960s. (source: worldflags101)