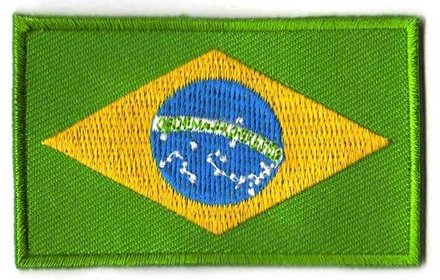 The Brazilian flag consists of a green base with a large yellow rhombus (diamond shape) in the middle of it. Inside the rhombus is a blue circle with white stars of different sizes. There is a white banner running through the circle and on it is a motto which reads "Ordem e Progresso" which translates in English to "Order and Progress".

Meaning: The colors green and yellow represent the Royal Houses of Bragan’_a (Emperor Pedro I) and Habsburg (Empress Leopoldina). The stars on the blue circle represent the sky over Rio de Janeiro on the night of November 15, 1889, which is the day the Republic of Brazil was declared. Each of the 27 stars represents a different Brazilian state and the Federal District. The number of stars changes anytime a new state is created. When the Brazilian Republic was founded there were 21 stars. The star representing the Federal District is 'Sigma Octantis', and its position near the south celestial pole, makes it visible across most of Brazil all year round.

History: The current Brazilian flag was adopted on May 11, 1992. There was a temporary Brazilian flag, which was used from November 15 to 19, 1889, that was similar to in design, and was inspired by the flag of the United States. Brazil declared independence from Portugal on September 7, 1822.

Interesting Facts: Many people believed that the Brazilian flag's colors represented Brazil's natural richness. The green would represent the forests of the Amazon and the Atlantic Jungle; while the yellow rhombus represented the country's gold reserves, as Brazil was once home to the largest gold mines in world. Between the years 1500 and 1900 more gold was found in Brazil than had previously existed in the whole world (source: worldflags101).