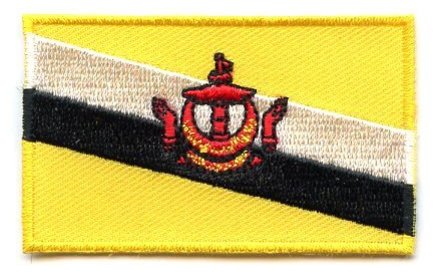 The flag of Brunei consists of a yellow base with white and black stripes that run diagonally across the flag - although they are officially called parallelograms. The white stripe, which is slightly broader, is on top of the black one. In the center of the Brunei flag is the coat of arms in red.

Meaning: The coat of arms on the Brunei flag is a crescent (symbol of Islam) joined with a parasol (symbol of monarchy), with two gloves on both sides. Below the crescent is a ribbon. The crescent and ribbon have Arabic inscriptions which translate to "State of Brunei, Abode of peace" and "There is no deity but God, Muhammad is the messenger of God".

History: The flag of Brunei was adopted on September 29, 1959 when the country was a British protectorate. The Brunei flag was kept after the country gained full independence on January 1, 1984.

Interesting Facts: A similar Brunei flag without the coat of arms was used in Brunei in 1906 (source: worldflags101).