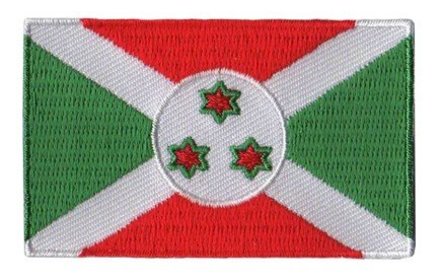 The Burundi flag features a white x cross that divides it into four parts. The left and right sides of the flag are green and the upper and lower parts are red. In the middle of the flag and the cross lies a white circle that has three six-point red stars with green borders inside. There is one star at the top of the circle and two beneath it, in a triangular configuration.

Meaning:
The three stars in the middle of the Burundi flag officially refer to the words in the national motto "Unité, Travail, Progrès" (French for "Unity, Work, Progress"). The stars also represent the three ethnic groups who live in Burundi - the Hutu, Tutsi and the Twa. The red in the Burundi flag stands for the country's independence struggle. The green represents hope and the white stands for peace.

Interesting Facts:
According to some references, the civilians of Burundi only have the right to use this flag on holidays. Otherwise the Burundi flag is used as a state flag and military flag on land. The President of the Republic of Burundi has the right to use the flag on buildings. (source: worldflags101)