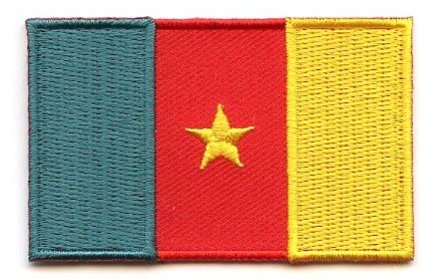 The flag of Cameroon consists of three vertical stripes - the left stripe is green; the middle one is red; and the right stripe is yellow. In the middle of the flag and red stripe is a five-pointed yellow star.

Meaning: Red, yellow and green are the pan-African colors and the pattern of the flag is similar to the French Tricolor. The green color in the flag symbolizes the rich forest vegetation of the country's southern region, as well as signifying hope for a happy future. The red represents independence and unity; while the yellow represents the savannas in the north and the sun as the source of Cameroon's happiness. The star symbolizes the unity of the country.

History: The Cameroon flag was adopted on May 20, 1975 after Cameroon was made a unitary state. Cameroon gained independence from France on January 1, 1960.

Interesting Facts: Cameroon is the second modern African state (after Ghana) to adopt pan-African colors. They are based on the colors of the Ethiopian flag (source: worldflags101).