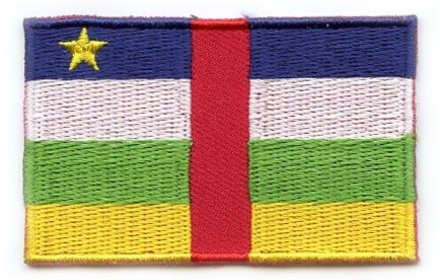 The flag of the Central African Republic consists of four equal horizontal stripes with an equal vertical red stripe down the middle of it. The horizontal stripes appear from top to bottom in blue, white, green and yellow. There is a yellow five-point star situated on the blue stripe near the top left hand corner of the flag.

Meaning: The red vertical stripe, representing blood, is superimposed to symbolize the need for respect between Europeans and Africans. It also represents the blood of the nation; the blood spilt in its fight for independence; and the blood Central African's would spill to protect their homeland. The yellow star of independence symbolizes a bright future. The blue stripe represents vastness, freedom, serenity and the sky. The color white represents bravery, peace and dignity; while the green symbolizes hope and faith; and the yellow stripe represents the people's tolerance, hospitality and charity.

Interesting Facts: Political parties in the Central African Republic are forbidden to use the national flag in their propaganda (source: worldflags101).