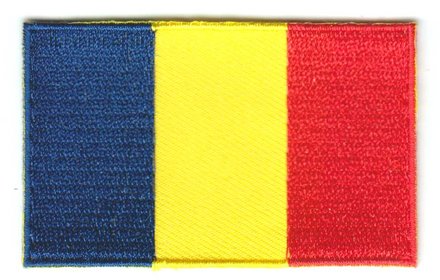 The flag of Chad consists of three equal vertical stripes - the left stripe is blue, the middle stripe is yellow and the right stripe is red.

Meaning: The blue stripe represents the sky, hope, agriculture and the waters in the south of the Chad. The yellow stripe symbolizes the sun and the desert in the north of Chad. The red stripe stands for progress, unity and sacrifice.

History: The flag of Chad was adopted on November 6, 1959, and was inspired by the French Tricolore flag and the pan-African colors, which were altered by using blue instead of green. The color change was made in order to avoid confusion between the flags of Chad's neighboring countries. Chad gained its independence from France on August 11, 1960.

Facts: The flag of Chad is the same as the flag of Romania, but the two flags are not related historically in any way. (source: worldflags101)