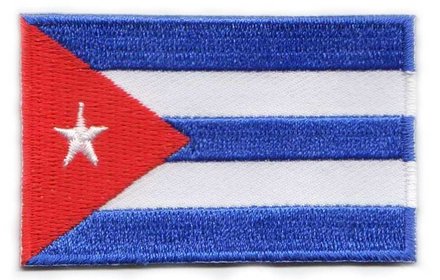 The Cuban flag consists of five horizontal stripes of equal width:
- The top, middle and bottom stripes are blue, which refer to the three old divisions of the island
- The other two stripesare white, which represent the strength of the independent ideal
- There is a red horizontal triangle on the left side of the Cuban flag pointing toward the middle, which symbolizes equality, fraternity and freedom, as well as the blood shed in the island's struggle for independenc
- In the middle of the triangle lies a white five-pointed star, which symbolizes the absolute freedom among the Cuban people.

Interesting facts: In the mid 1800's many people wanted to liberate Cuba from Spain, and unite the island with the United States of America. This could be the reason why the colors of the Cuban flag patch are red, white and blue, with stripes and a star. After the United States seized Cuba from Spain during the Spanish-American War, the American Stars and Stripes flag flew from Jan. 1, 1899 until May 20, 1902 (source: worldflags101).