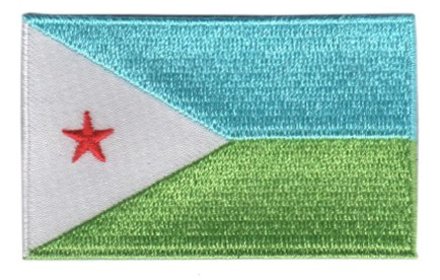 The Djibouti flag consists of two equal sized horizontal stripes of blue on the top and green on the bottom of the flag. There is a white horizontal isosceles triangle on the left of the Djibouti flag which points to the middle. In the center of the triangle there is a red five-pointed star.

Meaning: The white triangle stands for peace. The blue stripe represents the sea and sky and the green stripe symbolizes earth. The red star stands for unity.

History: The Djibouti flag was adopted on June 27, 1977, the same day the country gained independence from France.