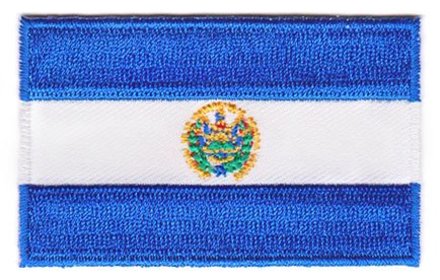 The flag of El Salvador consists of three equal horizontal stripes - the top and bottom stripe are blue; and the middle stripe is white. In the middle of El Salvador's flag is the country's coat of arms.

Meaning: The blue stripes represent the Pacific Ocean and Caribbean Sea; while the white stripe symbolizes peace. The state coat of arms on El Salvador's flag is based on the coat of arms of the former United Provinces of Central America. The coat of the arms shows a triangle which represents equality and the three branches of El Salvador's government. Inside the triangle are five volcanoes which symbolize the five former members of the federation, flanked by the blue of the ocean and sea. The triangle contains symbols of liberty, ideals of the people and peace, which are represented by a red cap, golden rays and the rainbow. The triangle also shows the date that El Salvador gained independence from Spain. Underneath the triangle lies El Salvador's national motto which translates in English to 'God, Union and Liberty'. The fourteen clusters of leaves represent the 14 departments or states of El Salvador.

Interesting Facts: The flag of El Salvador is based on the flag of the United States of Central America. Unauthorized use of the El Salvador flag will result in a monetary fine. There are three classes and sizes of national flags in El Salvador they consist of: - "The great flag [la magna]." - "A second flag for use on public buildings and offices." - "A third flag used for parades." (source: worldflags101)