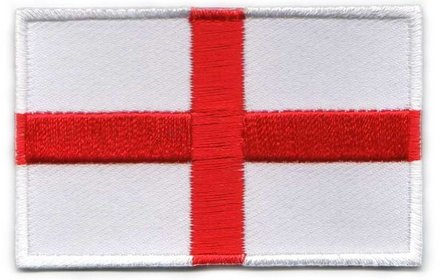 The flag of England consists of a white base with a red cross going through the middle of it.

History: The legend of George slaying the dragon dates back to the 12th century. Saint George became England's patron saint during the 13th century. The Red Cross first appeared in the crusades and is one of the earliest known emblems used to represent England. The earliest record of St George's flag being used at sea as an English flag was in 1545.

Interesting Facts: Many are unaware that the Cross of St George is the flag of England, and not the more familiar Union Jack. The Union Jack is the flag of the entire United Kingdom, including Great Britain (England, Scotland, and Wales) and Northern Ireland. The cross of St. George, however, is incorporated into the Union Jack (source: worldflags101).