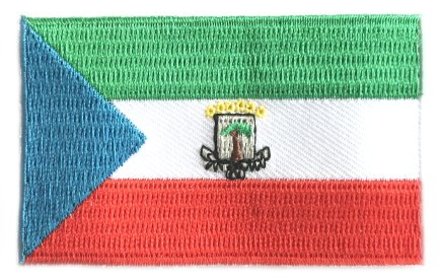 The flag of Equatorial Guinea consists of three equal horizontal stripes - the top stripe is green, the middle one white and the bottom stripe are red. On the left side of the flag is a light blue horizontal triangle pointing towards the middle. In the center of the white stripe and flag is the Equatorial Guinea's coat of arms. The country's coat of arms is gray with a silk cotton tree. Above the coat of arms are six six-pointed yellow stars, and beneath are the words, 'Unidad Paz Justica', which translates to 'Unity Peace Justice'.

Meaning: The stars represent the mainland and the islands of Equatorial Guinea. The green stripe symbolizes the country's lush vegetation and agricultural wealth. The white represents peace and the red stands for Equatorial Guinea's struggle for independence. The blue triangle symbolizes the sea, which links the different parts of the nation together. The silk cotton or god tree in the coat of arms represents the country's historical link to Spain. It was under a similar tree that a treaty was signed with the Spanish at the time of colonization.

Interesting Facts: It was under a silk cotton tree, pictured on the Equatorial Guinea flag, that a treaty was signed with the Spanish at the time of colonization. (source: worldflags101)