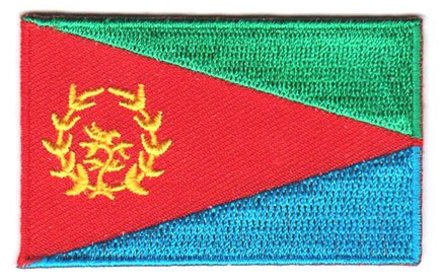 The flag of Eritrea consists of two horizontal stripes - the top stripe is green and the bottom one is light blue. From the left side of the flag is a horizontal red triangle that extends the length of the flag. Inside the triangle is a yellow wreath.

Meaning: The green stripe symbolizes the agricultural and livestock economy of Eritrea. The red stands for the blood shed during Eritrea's struggle for independence. The blue represents the marine wealth while the yellow represents the mineral wealth of Eritrea. The olive wreath and branch on the flag originate from Eritrea's first national flag which was used between 1952 and 1959. The olive wreath was adopted from the United Nations flag and symbolizes peace.

History: The Eritrean flag was adopted on December 5, 1995, making it one of the world's newest flags. Eritrea received independence from Ethiopia on May 24, 1993.

Facts: The basic design of the Eritrean flag was adopted from the flag of the Eritrean People's Liberation Front, which led the fight for Eritrean freedom. Also the 30 leaves symbolise the number of years spent in civil war before achieving independence.