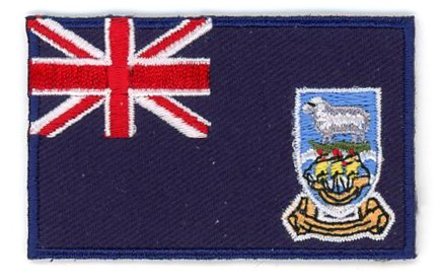 Meaning: The Union Jack represents the Falkland Islands' links with Britain. The ship in the coat of arms is supposed to be the 'Desire' - the ship that discovered the islands in 1592. The colony's motto 'Desire the Right' is written on a scroll at the bottom of the coat of arms.

History: The current Falkland Islands flag was adopted on September 29, 1948. The flag changed in appearance 1999 when the Ministry of Defense changed the specification for the placement of badges on the flag. The size of the badge was increased and all white discs were removed.

Interesting Facts: Before 1948 there was a bull in the emblem, but since sheep-raising is the major livestock on the Falkland Islands, the bull was changed to a ram. (source: worldflags101)