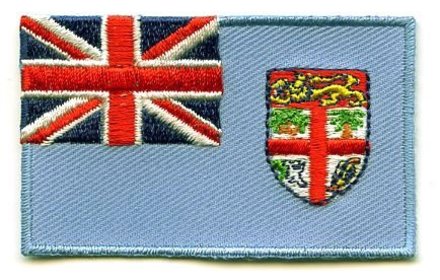 The flag of Fiji consists of a light blue base with a British Union jack in the upper left corner which extends to half the length of the flag. Centered on the right side of the Fiji flag is the country's coat of arms. In the coat-of-arms are three sugar canes, a coconut palm, a dove with an olive branch and a bunch of bananas. The lion in the emblem is holding a peeled coconut. The emblem is divided into quarters by an English St. George's Cross.

Meaning: The Union Jack represents Fiji's links to Britain. The light blue base symbolizes the Pacific Ocean. The dove in the coat of arms symbolizes peace. Two symbols of the emblem represent Fiji's colonial past. The golden lion holding a coconut represents Britain, as does the red cross of St George of England in the middle of the emblem.

History: The Fiji flag was adopted on October 10, 1970 the day it received independence from Britain. The base of the Fiji flag, flown before Fiji's independence, was dark blue.

Interesting Facts: Fiji held a competition upon its independence to design a new Fiji flag, but their current flag is still very similar to their old flag. This might be because Fiji still has strong economic and political ties with Britain. One reason for the light blue base was to distinguish the Fijian flag from the flags of neighboring British Commonwealth countries (source: worldflags101).