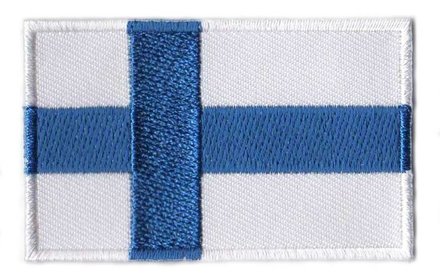 The flag of Finland consists of a white base with a blue cross . The vertical stripe in the cross is situated to the left side of the flag; while the horizontal one is centered.

Meaning: An old poet described Finland's colors as representing "the blue of our lakes and the white snow of our winters." The cross on the Finland flag is common in most Scandinavian flags, and symbolizes Finland's hereditary link to the other Scandinavian countries.

History: The flag was originally adopted in 1918, based on the country's coat of arms. The current Finland flag was adopted on May 26, 1978. Finland was under Russian occupation from 1899 to 1917, and the nation sought to use a flag of its own. It wasn't until Finland gained independence in 1917 that a design for an official flag gained momentum.