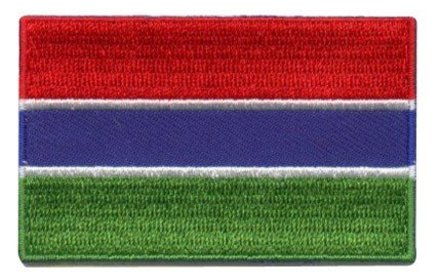 The flag of Gambia consists of five horizontal stripes - the top red stripe and the bottom green stripe are of equal width; while the blue stripe in the middle of the flag is bordered on the top and bottom by white stripes of equal width.

History: This Gambian flag was adopted on February 18, 1965, the day it gained independence from Britain.

Interesting Facts: The idea of the country's national flag came from The Republic of The Gambia, but the flag was actually designed by the College of Arms in England (source: worldflags101).