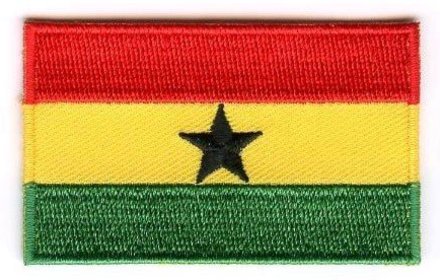 The flag of Ghana consists of three equal horizontal stripes - the top stripe is red; the middle one yellow; and the bottom stripe is green. In the middle of the flag and the yellow stripe lies a black five-pointed star.

Meaning: The Ghana flag makes use of the Pan-African colors - the red stripe represents the blood spilt during Ghana's struggle for independence; the yellow stripe symbolizes the mineral wealth of the country; and the green represents the vegetation and fertility of the nation. The black five-pointed star symbolizes African freedom and the African people. Ghana was the first African nation to feature these colors.

History: The current version of the Ghana flag was adopted on February 28, 1966. It was originally adopted on March 6, 1957, when Ghana gained independence from Britain but a white stripe replaced the yellow one from 1964 to 1966. The country also changed its name to Ghana from the Gold Coast when it gained independence.

Interesting Facts: On November 23, 1958, a union between Ghana and Guinea was formed with a flag similar to Ghana's but with two black stars on it (source: worldflags101).