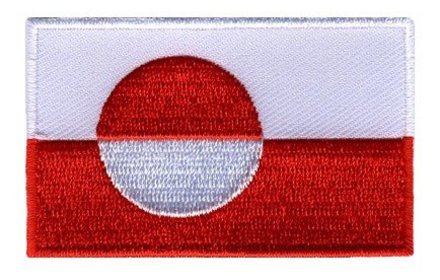 History: The Greenland flag was adopted on June 21, 1985. The first proposal for a flag of Greenland happened in 1973 when several people suggested that a green-white-blue flag might be appropriate for the country. This suggestion inspired others to display their designs, and in 1974 a newspaper published 11 proposals. Ten of these designs had a Scandinavian cross on them. However, in a vote organized by the newspaper paper, the Danish flag remained the favorite. The government held a design contest in 1980 and 555 designs were sent in. However the Government couldn't agree on a design so they invited artists to submit more designs. The current Greenland flag won on a vote of 14-11. Several people were unhappy with the decision not to adopt a Scandinavian cross flag. Greenland is a Danish dependency but has been self governing since 1979.

Interesting Facts: Greenland's flag is called 'Erfalasorput' which means 'our flag', but is also called 'Aappalaaroq' - 'the red'. This term also used to be applied to the Danish flag. In Thue Christiansen's words: "The colors are the same as 'Dannebrog' (the Danish national flag) and thus we can also continue to call our flag Aappalaartoq, 'the red'." (source: worldflags101)