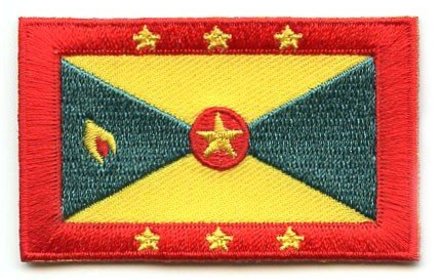 The flag of Grenada consists of a red border on the outer edge of the flag. Centered on the horizontal stripes of the border, at the top and bottom, are three yellow five-point stars evenly spaced. The inner area of the Grenada flag consists of two vertical yellow triangles facing each other and two horizontal green triangles facing each other. The points of all four triangles meet in the center of the Grenada flag, and a red circle with a yellow five-pointed star lies inside. On the left side of Grenada's flag, located inside the green triangle, there is a yellow and red emblem of a nutmeg.

Meaning: The color yellow in Grenada's flag symbolizes the sun and the friendliness of the inhabitants; the green represents the country's vegetation and agriculture; and the red stands for the courage and vitality of Grenada's people. The yellow stars represent the seven parishes of the country. The nutmeg signifies that Grenada is one of the world's largest producers of nutmeg.