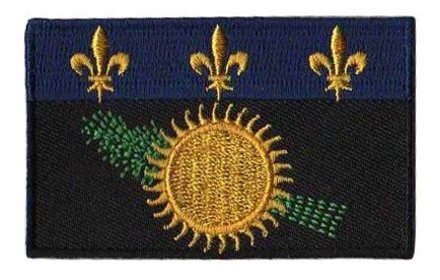 Guadeloupe, an overseas region and department of France located in the Caribbean, has no flag with official status other than the French national flag. Next to the French flag an inscribed regional logo on a white field is often used as regional flag similar to the flag use in Mayotte and Réunion. The logo of Guadeloupe shows a stylized sun and bird on a green and blue square with the subscript Region Guadeloupe underlined in yellow.

A locally used unofficial flag, based on the coat of arms of Guadeloupe's capital Basse-Terre has a black or red field with a yellow sun and a green sugar cane, and a blue stripe with yellow fleurs-de-lis on the top. The unofficial flag is more commonly used than the official one. (source: wikipedia)