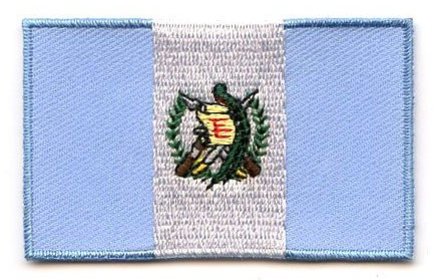 The flag of Guatemala consists of three even sized vertical stripes - the left and right stripes are sky blue; and the middle stripe is white. In the middle of the white stripe and flag is Guatemala's coat of arms. The coat of arms consists of a shield with two rifles and two golden swords tied with laurel branches, on a light blue field. There are also golden letters that read "Libertad 15 de Septiembre de 1821." Above, there is a Quetzal bird which is the symbol of Independence and autonomy of the Nation.

Meaning: In the Guatemalan flag's coat of arms, the crossed rifles indicate Guatemala's willingness to defend itself by war if need be; while the olive branches symbolize the preferred peace. The sky blue stripes represent the fact that Guatemala is located between the Pacific and Atlantic Oceans, and the white stripe stands for the purity of the country's values and peace.

History: The current Guatemalan flag was adopted on December 26, 1997, making it one of the world's newest flags. Guatemala received independence from Spain on September 15, 1821. The colors of the Guatemalan flag have their roots in the flag of the former federation of the United Provinces of Central America.

Interesting Facts: The stripes of the Guatemalan flag were changed from horizontal to vertical in 1871 to distinguish it from the flags of the other Central American countries (source: worldflags101).