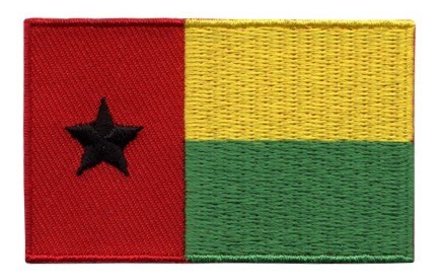 The flag of Guinea-Bissau consists of two equal size horizontal stripes - the top stripe is yellow; and the bottom one is green. On the left side of the flag is a red vertical stripe with a black five-pointed star in the center of it.

Meaning: The black star on the Guinea-Bissau flag symbolizes freedom and the African people; the red stripe represents the blood spilt for the country's liberty and for the nation's suffering during colonial rule; while the yellow represents the sun and labor; and the green stands for the lush vegetation, agriculture and hope of Guinea-Bissau.

History: The Guinea-Bissau flag was adopted on September 24, 1973, the day the country declared independence from Portugal.