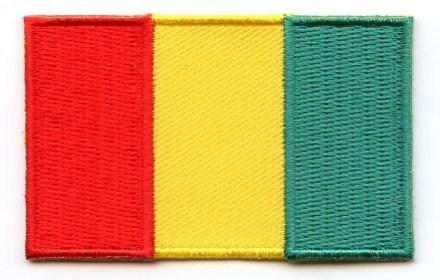 The flag of Guinea consists of three equal sized vertical stripes - the left stripe is red; the middle is yellow; and the right stripe is green.

Meaning: Sékou Touré, was Guinea's first president from its independence in 1958 until Touré died in 1984. Touré explained the meaning of Guinea's flag's colors in the following speech: "Red is the color of blood, symbol of our anti-colonialist martyrs. It is the sweat that runs over the ivory body of farmers, factory workers and other active workers. It is the wish for progress. Therefore red matches perfectly the first word of our motto: "Travail" (Work). Yellow is the color of Guinean gold and African sun. It is the source of energy, generosity and equality for all men to which he gives light equally. Therefore yellow matches perfectly with the second word of our motto: "Justice". Green is the color of the African vegetation. 85% of the population are farmers living in the countryside, which is ever covered with a green coat. Green symbolizes prosperity which will surely arise from the wide wealth of soil and subsoil, and the difficult life of the countryside masses in our country. Therefore, green will confirm the meaning of the third word of the motto: "Solidarite'" (Solidarity)."

History: The Guinea flag was adopted on November 10, 1958, after gaining independence from France on October 2, 1958.

Interesting Facts: The Guinea flag is similar to the flag of Ghana, except that on Ghana's flag the stripes are placed horizontally. The design of the Guinea flag is based on the French flag, However on Guinea's flag the French blue, white and red colors are replaced with the Pan-African colors of red, yellow and green (source: worldflags101).