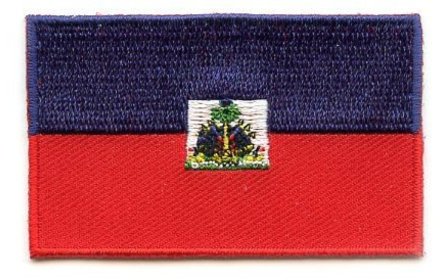 The flag of Haiti consists of two equal sized horizontal stripes - the top one is blue and the bottom one is red. In the center of the Haitian flag is the country's coat of arms, placed on a white square. The coat of arms consists of a Palmette surrounded by the liberty cap, and under the palms a trophy with the inscription: 'L'Union Fait la Force', which means 'in union there is strength'.

Meaning: The Haitian flag is an adaptation of the French national flag. The blue stripe represents the union of black Haitians and mulatto Haitians, who are represented by the red stripe.

History: The current Haitian flag was adopted on February 26, 1986. Haiti declared independence from France on January 1, 1804. The Haitian flag was originally blue and red vertical stripes, which was an adaptation of the French national flag. The white stripe of the French flag was omitted because it represented white colonial oppression. The vertical stripes were changed to horizontal stripes in the mid-19th century.

Interesting Facts: The Haitian flag is very similar to the flag of Liechtenstein (source: worldflags101).