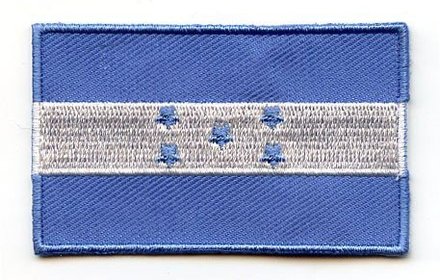 The flag of Honduras consists of three equal sized horizontal stripes - the top and bottom stripes are blue and the middle stripe is white. In the white stripe there are five blue five-pointed stars. There are two stars, one on top of the other, on the left and right side and there is a solitary star in the middle of them.

Meaning: The blue stripes represent the Pacific Ocean and the Caribbean Sea. The five stars represent the five nations of the United States of Central America (Honduras, El Salvador, Costa Rica, Nicaragua, and Guatemala) and the hope that the nations may form a union again.

Interesting Facts: The blue and white of the current Honduran flag represent an historical link to the other countries of the United States of Central America. These colors also remain in the flags of the other former members (source: worldflags101).