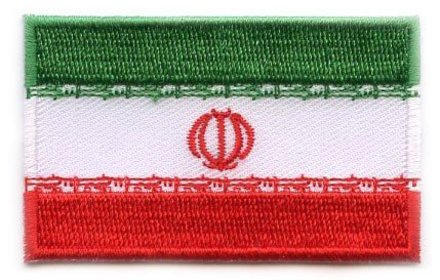 Meaning: The colour green on the flag symbolizes growth, happiness, unity, nature, vitality of the Iranian languages and people. White stands for freedom, peace, equality and cleanliness. Red on the flag stands for martyrdom, bravery, fire, life, love, warmth, and sophistication. The coat of arms in the middle is an edited form of the Tahwid which means "Allah" in Arabic.

History: The Iranian flag was adopted on July 29, 1980. The colors of the Iranian flag are traditional and probably date from at least the 18th century. A plain horizontal striped tricolor flag of green, white and pink had been in use in Iran since 1905. The pink stripe was officially changed to red in 1933.

Interesting Facts: The Iranian flag's centerpiece formerly consisted of a lion with a sword standing before a rising sun, with a crown above. But all traditional flags and banners were abolished after the abdication of the shah in 1979. The new emblem was designed by Hamid Nadimi, and was officially approved by Ayatollah Khomeini on May 9, 1980 (source: worldflags101).