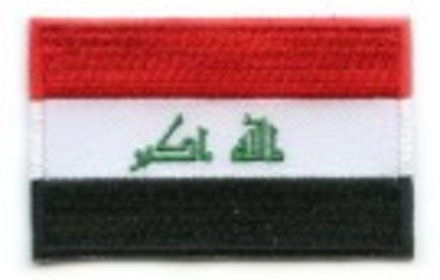 The flag of Iraq consists of three equal sized horizontal stripes - the top stripe is red; the middle one white; and the bottom stripe is black the takbir. The phrase 'God is Great' is written in green and is placed horizontally on the white stripe. There are also three green stars in the stripe.

Meaning: Red, white, black and green are called the pan-Arab colors. They have been linked to the Arab people and Islamic faith for centuries. The colors stand for Arab unity and independence and are used in the flags of many countries in the region. The green stars symbolize Iraq's unsuccessful attempt to unite with Egypt and Syria and each star was to represent a country in the union. Today they represent Iraq's desire for Arab unity. The writing on the flag reads Allah-o Akbar (God is Great).

History: The Iraqi flag was adopted on July, 31, 1963, but it was slightly modified on Jan. 13, 1991. The takbir [Allah Akbar (God is great) in Arabic script] was added to the 1963 flag during the Gulf War on January 13, 1991. Iraq's flag has had four different designs since the creation of Iraq in 1921. The Iraqi flag is based on the Arab Liberation Flag, introduced by Egyptian army officers involved in the 1952 coup d'etat, which overthrew the Egyptian monarchy. It has since been the inspiration for the flags of several countries in the region. Iraq was mandated as independent from Britain on October 3, 1932.

Interesting Facts: A new flag for Iraq was proposed in April 2004 but nothing has really become of it. At a ceremony on June 28, 2004 when the new interim government of Iraq was sworn in, a Iraqi flag similar to the 1991 pattern, but wider and with the stars and with the Arabic script more loosely spread across the width of the flag was present. The loose handwriting on the Iraqi flag was rumored to the writing of Saddam Hussein (source: worldflags101).