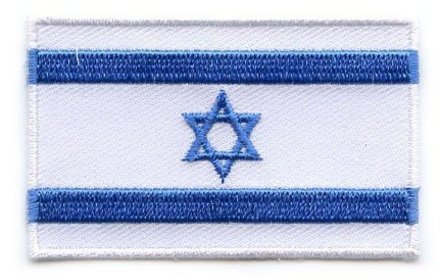 The flag of Israel consists of a white background with a horizontal blue stripe towards the top and an equal sized stripe across the bottom section. In the middle of the Israeli flag is a blue Star of David.

Meaning: The Star of David (Magen David) is also known as the Jewish star and is a symbol of Judaism. The Star was officially used as a Jewish symbol for the first time in 1354. A modern interpretation of the Israeli flag states the blue and white stripes represent purity, guided by the principles of the Torah and the Star of David represents a new beginning for Israel.

Interesting Facts: From most accounts, the Magen David was originally chosen on the flag of the Jewish community of Prague in the middle ages for decorative purposes. It was basically just a star with no meaning to it. There is a custom used for the Israeli national flag's flagpole. The flag pole is painted blue, about one third of the way up the pole, and white at the top section (source: worldflags101).