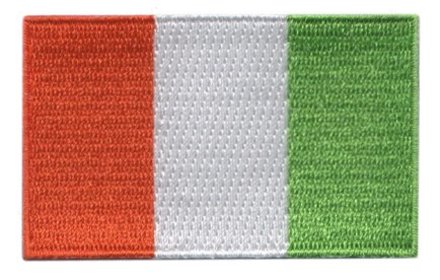 The Cote d' Ivoire flag consists of three equal sized vertical stripes - the left stripe is orange; the middle one is white; and the right stripe is green.

Meaning: According to Presidency of the Republic of Cote d'Ivoire - orange is the color of the land, rich and generous, the meaning of our fight, the blood of young people fighting for emancipation; white represents peace, but peace with justice; and green stands for hope and the certainty of a better future.

Interesting Facts: The flag of Cote d'Ivoire is similar to the flag of Ireland; although Ireland's flag is longer and the colors reversed. Protocol in Cote d'Ivoire states that saluting the flag should occur regularly in schools and colleges and during official ceremonies. (source: worldflags101)