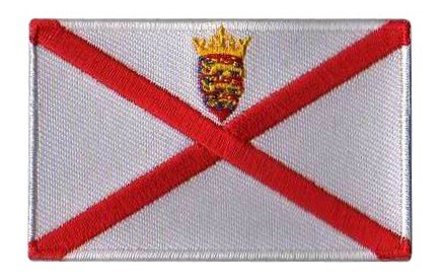 The flag of Jersey consists of a white base with a red saltire (diagonal cross). Jersey's coat of arms, which is a red shield with three yellow leopards, is present above the middle of the cross.

Meaning: The cross, which is referred to as a St. Patrick's Cross, symbolizes Jersey's link to Britain. The Cross is incorporated into the British Union Jack flag.

History: The Jersey flag was adopted on June 12, 1979 and first officially hoisted on April 1, 1981. Jersey is a British Crown Dependency. Jersey's previous flag was the cross without the coat of arms.

Interesting Facts: A traditional belief to the history of the Jersey flag states that Jersey, along with the other Channel Islands, was granted neutrality by Papal Bull during periods of war between England and France. Since Jersey was able to trade freely with both countries, Jersey ships needed to differentiate themselves from English ships so they rotated the St. George's Cross of the English flag to form a 'saltire' (diagonal cross) (source: worldflags101).