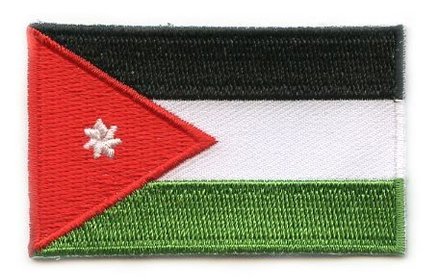 The flag of Jordan consists of three equal width horizontal stripes - the top stripe is black; the middle one is white; and the bottom stripe is green. On the left side of the flag is a horizontal red triangle pointing towards the middle. In the middle of the triangle is a white, seven pointed star.

Meaning: It is often believed the seven-pointed star represents the first seven verses of the Koran, which is the Islamic holy book. The official website of King Hussein (1953-1999) states: "The Jordan flag symbolizes the Kingdom's roots in the Great Arab Revolt of 1916, as it is adapted from the revolt banner. The black, white and green bands represent the Arab Abbasid, Umayyad and Fatimid dynasties respectively, while the crimson triangle joining the bands represents the Hashemite dynasty. The seven-pointed Islamic star set in the center of the crimson triangle represents the unity of Arab peoples in Jordan."

History: The Jordan flag was adopted on April 16, 1928. Jordan received independence from British administration by the League of Nations on May 25, 1946. Jordan was mandated to Britain in 1922. The same Jordan flag as today was used from 1921 to 1928, without the star on it. A star was introduced in 1928.

Interesting Facts: Before 1916, Jordan was a part of the Ottoman Empire and the country's flag was similar to the flag of Turkey (source: worldflags101).