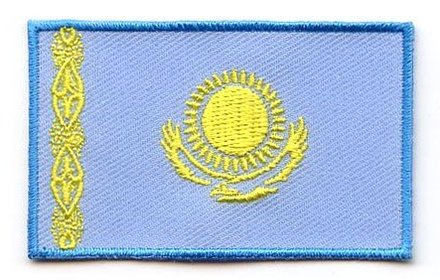 The flag of Kazakhstan consists of a light blue base. There is a golden sun with 32 rays in the center of the flag, and below the sun there is an eagle. There is also a golden webbed pattern running vertically down the left side of the flag.

Meaning: The pattern on the flag represents the artistic and cultural traditions of the old Khanate and Kazakh people. The light blue symbolizes the various Turkic peoples who make up today's population of the country - including the Tatars, Mongols, Uyghurs and others. The blue has a religious significance, representing the Sky God to many of these people. A modern interpretation states the blue background stands for Kazakhstan's broad skies, and for freedom. The steppe eagle and the sun represent freedom and the flight toward greater heights and fulfilment of aspiration.

History: The Kazakhstan flag was adopted on June 4, 1992. Kazakhstan gained independence from the Soviet Union on December 16, 1991.

Interesting Facts: The original Kazakhstan flag that was adopted in 1992 had a red ornament but was soon changed to gold (source: worldflags101).