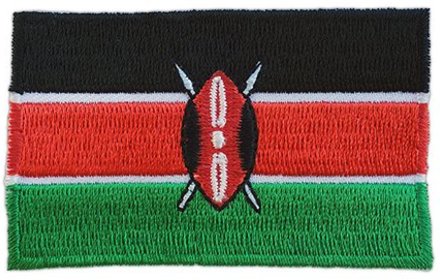 The flag of Kenya consists of three horizontal stripes - the top stripe is black; the middle one is red; and the bottom stripe is green. The red stripe in the middle is bordered on the top and bottom by a thin white stripe. There is an emblem in the center of the flag that consists of a Masai warrior's shield and spears.

Meaning: The black stripe represents the African people; while the red stands for the struggle for independence. The green represents Kenya's agriculture and natural resources. The thin white stripes symbolize peace and unity. The central emblem represents Kenya's fight for freedom and their preparedness to defend that freedom.

History: The Kenyan flag was adopted on December 12, 1963, after gaining independence from Britain. The Kenyan flag is based on the flag of the Kenyan African National Union (KANU), the party which led the campaign for Kenya's independence. The country changed its name from the Dominion of Kenya to the Republic of Kenya in 1964.

Interesting Facts: Since the Kenyan flag is based on the KANU Party, who has lost power, it's possible a new Kenyan flag may be introduced in the future (source: worldflags101).