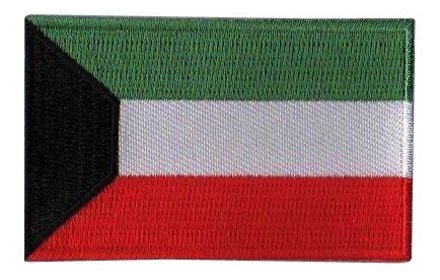 The flag of Kuwait consists of three horizontal stripes - the top stripe is green; the middle one white; and the bottom stripe is red. On the left hand side of the Kuwait flag there is a black trapezoid.

Meaning: Red, white, black and green are referred to as pan-Arab colors and have been linked to the Arab people and Islamic faith for centuries. The colors on the Kuwait flag represent Arab unity and independence and are used in the flags of many countries in the region. The green stripe represents the fertility of Arab nations and the black represents the defeat of enemies. The red stands for the blood of the defeated enemy and white symbolizes honor and purity.

History: The Kuwait flag was adopted on September 7, 1961, after Kuwait gaining independence from Britain on June 19, 1961. The Kuwait flag was officially hoisted on November 24, 1961. The flag was replaced after Kuwait was invaded by Iraq in August 1990, and was restored when Kuwait was liberated in February 1991. The design of the Kuwait flag is believed to be based on the Arab Revolt Flag of 1916, which was used as a symbol of Arab nationalism during liberation struggles against Ottoman (Turkish) rule.

Interesting Facts: Up until 1961 the flag of Kuwait was always based on a red background. Kuwait has used 24 different flags since 1714 (source: worldflags101).