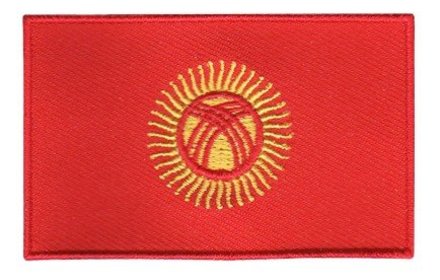 The flag of Kyrgyzstan consists of a red background with a yellow sun in the center, which has 40 rays. Inside the sun is the circular emblem of a 'yurt' (or tent roof). which is the traditional tent used by the nomadic Kirghiz people.

Meaning: The sun represents light, infinite nobility and eternity. The red background is believed to be the color of the national hero Manas the Noble, who united the 40 tribes of Kyrgyzstan, which are represented by the 40 rays emanating from the sun symbol.

History: The Kyrgyzstan flag was adopted on March 3, 1992, making it one of the world's newest flags. Kyrgyzstan gained independence from the Soviet Union on August 31, 1991.

Interesting Facts: In 2001 the Tax Service of Kyrgyzstan was given its own flag by the government. (source: worldflags101)