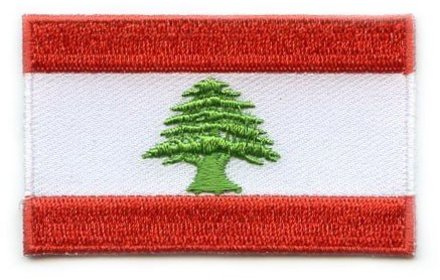 Meaning: The cedar tree is a prominent feature of the Lebanese flag. It has been used as a symbol by the Maronite Christians of Lebanon since the 18th and 19th centuries. The tree represents peace, immortality and tolerance. The red stripes symbolize martyrdom and self-sacrifice, and the white represents the snow-capped peaks of Lebanon's mountains. Historically, red and white have symbolized the Kayssites (red) and the Yemmenites (white), who were opposing clans within the Lebanese territory between 634 and 1711.

History: The Lebanese flag was adopted on December 7, 1943 after gaining independence on November 22, 1943. Lebanon was created by France in 1920 and the Lebanese flag is based on the French tricolor. The cedar tree was placed in the white of the French flag. When Lebanon claimed independence from France they got rid of the French blue and changed the stripes from vertical to horizontal. A green cedar tree on a white base was used as a Lebanese flag after Ottoman (Turkish) rule came to an end in the region at the end of the First World War, in 1918.

Interesting Facts: Some flag manufacturers have made the cedar tree green and brown, but Lebanon's constitution states that the tree should be green only (source: worldflags101).