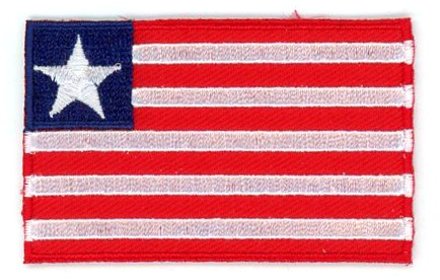 The flag of Liberia consists of six red and five white alternating horizontal stripes that run down the flag. In the top left hand corner of the Liberian flag there is a blue square which has a white five-pointed star in the center of it.

Meaning: The 11 stripes symbolize the 11 signatories of the Liberian declaration of independence. The red and white colors symbolize courage and moral excellence. The white star represents the freedom the ex-slaves were given and the blue square represents the African mainland.

History: The Liberian flag was adopted on July 26, 1847 after gaining independence. Liberia was settled by freed American slaves in the early 1800s, naming their country for liberty itself. The country was originally recognized as a colony of the USA. For this reason, the Liberian flag is very similar to the flag of the United States of America.

Interesting Facts: The Liberian flag is seen on many ships around the world, as Liberia offers registration under its flag. Shipping companies do this to avoid taxes and restrictions that other countries enforce. It is estimated that about 1600 ships fly the Liberian flag as a flag of convenience. This brings in much of the country's revenue. (source: worldflags101)