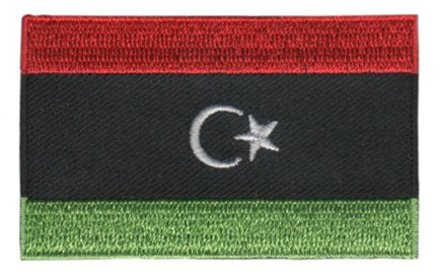 The flag of Libya was originally introduced in 1951, following the creation of the Kingdom of Libya. It was designed by Omar Faiek Shennib and approved by King Idris Al Senussi who comprised the UN delegation representing the regions of Cyrenaica, Fezzan and Tripolitania at UN unification discussions.

The flag fell out of use in 1969, but was subsequently adopted by the National Transitional Council and anti-Gaddafi forces and effectively reinstated as the country’s national flag in article three of the Libyan Draft Constitutional Charter for the Transitional Stage issued on 3 August 2011.

The flag of Libya is described in Article 7 of the Constitution of 7 October 1951. It was officially adopted on 24 December 1951. The passage from the constitution reads: ”Chapter 1, Article 7: The national flag shall have the following dimensions: Its length shall be twice its breadth, it shall be divided into three parallel coloured stripes, the uppermost being red, the centre black and the lowest green, the black stripe shall be equal in area to the two other stripes combined and shall bear in its centre a white crescent, between the two extremities of which there shall be a five-pointed white star.” (source: wikipedia)