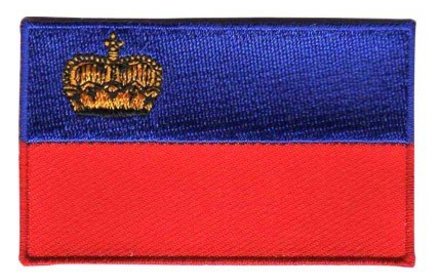 The flag of Liechtenstein consist of two horizontal halves - the top half is blue and the bottom is red. In the upper left corner of Liechtenstein's flag there is a gold crown.

Meaning: In 1937, the head of the government, Joseph Hoop, described the meaning of Liechtenstein's flag as this: "Blue is the color of a radiant sky, red the color of the embers in the fireplace during evening gatherings; gold of the crown shows that our people, our country and our princely House are united in heart and spirit. Blue and red are the country's national colors. The gold crown, outlined in black, is the symbol of Princely authority and symbolizes the bond between Liechtenstein's prince, the state and the people."

Interesting facts: Previous to the blue and red flag in 1921, Liechtenstein had a yellow over red colored flag (source: worldflags101).