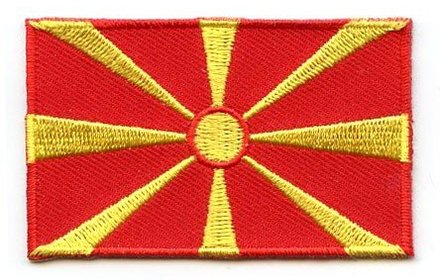 The flag of Macedonia consists of a centered yellow sun, with eight extending rays, which widen atop a red background.

Meaning: The sun design is a simplified version of the Star of Vergina, which appeared on Macedonia's former national flag. Red has been a significant color throughout the history of Macedonian flags. The sun also represents "the new sun of liberty", which is mentioned in the country's national anthem.

History: The Macedonian flag was adopted on October 5, 1995, making it one of the world's newest flags. Macedonia gained independence from Yugoslavia on September 8, 1991. When Macedonia was part of Yugoslavia the flag was red with a red star in the top left corner. Greece objected to the new republic calling itself Macedonia and to the design of the new national flag. Greece already had a province called Macedonia and feared Macedonia had intentions to extend its border to include Greek Macedonia. Greece also objected to the use of Alexander the Great's Star of Vergina, which appeared on Macedonia's original flag (from 1991 to 95) as Greeks believed the symbol culturally belonged to Greece and wasn't a Slavic symbol. Macedonia then removed the star from their flag.

Interesting Facts: According to a 1997 Macedonian law, flags of foreign countries cannot be flown from public buildings except on certain public and religious holidays when they may be flown alongside the Macedonian flag. This law affects first and foremost the use of the Albanian flag, which was used on municipal buildings in towns of Western Macedonia. The law was followed by police action against municipal authorities in the towns of Tetovo and Gostivar, where the Albanian flag was removed from the town halls. This led to protests and demonstrations and finally resulted in rioting. Three people died and more than 50 were injured with 300-400 people being detained or arrested (including the mayor of Gostivar). On July 12, 1997, demonstrators, many of them Albanians from Macedonia, burned the Macedonian flag in the Albanian capital of Tirana (source: worldflags101).