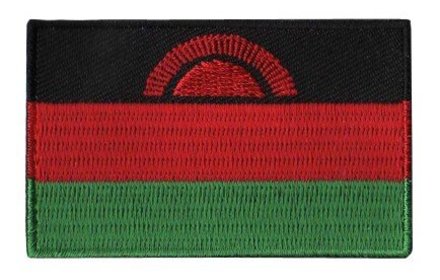 The flag of Malawi consists of three equal sized horizontal stripes - the top stripe is black; the middle one red; and the bottom stripe is green. There is a red, rising half-sun in the middle of the top black stripe.

Meaning: The Malawi flag features a black stripe that represents the people of Africa. The color red stands for the blood spilt in Malawi's struggle for independence; while the color green symbolizes the country's vegetation. The rising sun represents the dawn of freedom and hope on the African continent.

History: The Malawi flag was adopted on July 6, 1964, the day it gained independence from Britain. From the late 19th century until independence, Malawi was a British protectorate called Nyasaland. The Malawi flag is based on the banner adopted by the Malawi Congress Party which was the party that led the campaign for independence and whose leader became the first prime minister of Malawi.

Interesting Facts: In late 1998, there were rumors that Malawi was going to change its flag because it was based on the former flag of the Malawi Congress Party, which was the country's main opposition and former ruling party. (source: worldflags101)