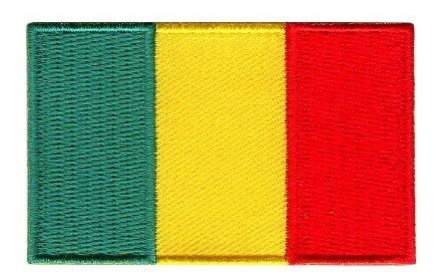 The flag of Mali consists of three equal-sized vertical stripes - the left stripe is green; the middle is yellow; and the right stripe is red.

Meaning:
The green stripe symbolizes hope, nature and fertility of the land. The yellow represents purity and mineral wealth and red stands for strength and the blood spilt for independence.

History: The Mali flag was adopted on March 1, 1961. Mali gained independence from France on September 22, 1960. The first flag of Mali was adopted on April 4, 1959, when French Sudan and Senegal formed the Mali Federation. Senegal left in August, 1960 and the flag was changed in 1961. The flag of Senegal is similar to Mali's except it has a star in the middle of it. The flags were based on the French flag, except Pan African colors were used. The colors were also those of the African Democratic Rally which was the political party who led the fight for independence.

Interesting Facts: A 'kanaga' symbol was used on the first Mali flag, until it was abolished in 1961. The symbol is a black human-like image and it was removed because of pressure from Muslims who do not approve of making images in the human form. (source: worldflags101)