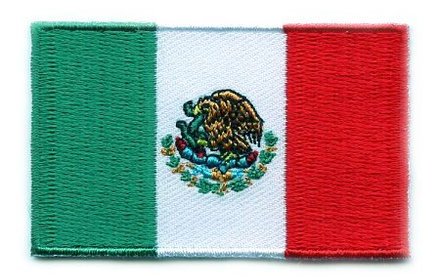 - The left stripe is green, which represents hope
- The middle stripe is white, and symbolizes religion
- The right stripe is red, and represents independence and the unity of the natiom

Mexico's coat of arms depicts an ancient Aztec legend that tells a tale of God telling a band of wandering Aztec Indians that when they came across an eagle eating a snake while perched on a nopal cactus growing out of a rock surrounded by water, they were to create their home. This spot eventually became Mexico City. This scenario with the eagle eating a snake is depicted on the Mexican coat of arms.

The current Mexican flag was adopted on September 16, 1968. Mexico gained independence from Spain on September 21, 1821. At that time introduced a basic flag of green, white and red diagonal stripes. The Mexican coat of arms - which represents the 1325 founding of the Aztec capital Tenochtitlán (on the site occupied by Mexico's modern capital, Mexico City) - was added in 1823. The coat of arms has changed several times since then and this has resulted in several modifications to the Mexican flag.

Fun fact about this Mexican flag patch: the flag is often called the Bandera Nacional