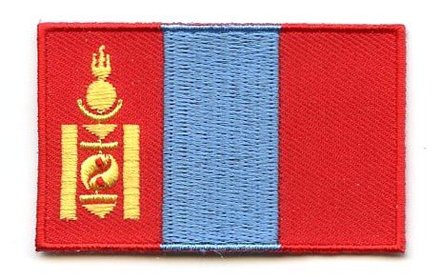 The flag of Mongolia consists of three equal sized vertical stripes - the left and right stripes are red and the middle one is blue. On the left hand side of the Mongolian flag, in the red stripe is the country's national emblem which is a 'soyombo', a columnar arrangement of abstract and geometric representation for fire, sun, moon, earth, water, and the yin-yang symbol.

Meaning: Blue is a traditional Mongolian color and it represents the sky. The red stripes initially represented Mongolia's socialist beliefs, but a modern interpretation means liberty and progress. The soyombo is a national emblem which contains individual symbolism within it. The fire at the top of it represents prosperity, contentment and regeneration. The three flames represent the past, present and future. The sun and moon symbolize the universe and are believed by Mongolians to be the mother (sun) and father (moon) of their nation. The triangles pointing at the ground are arrowheads and represent Mongolian's willingness to defend their nation. The horizontal rectangles stand for honesty, justice and righteousness. The middle circle can be interpreted as the Buddhist yin and yang symbol, which represents complementary opposite forces existing together in the universe - such as positive and negative, male and female, passive and active, fire and water, etc. The circle can also be interpreted as two fish that never close their eyes, representing the watchfulness and vigilance of Mongolians. The vertical rectangles represent pillars which symbolize strength, resolve and hardness.

History: The current Mongolian flag was adopted on February 12, 1992. The flag is similar to the one used in 1949, except for the removal of a star on the current version. Mongolia received independence from China on July 11, 1921. Mongolia introduced the basic design of the flag in 1940.

Interesting Facts: The soyombo was adopted as the official symbol of the Mongolian People's Republic by the first People's Great Khural in 1924 (source: worldflags101).