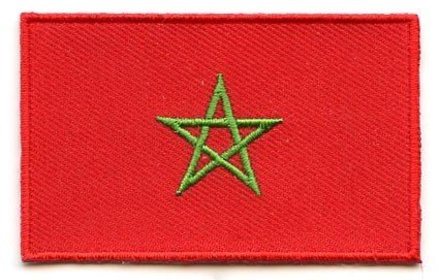 The flag of Morocco consists of a red base with a green outlined, five-point star known as the 'Seal of Solomon' in the center of it. This last one represents the link between God and the nation. Green and red are traditional colors of Islam, which is Morocco's official religion. Red is also the color of the reigning Moroccan dynasty.

The Moroccan flag was adopted on 17-11-1915. Morocco gained independence from France on March 2, 1956. The 'Seal of Solomon' was added to the red flag, previously used by the reigning Moroccan dynasty since the 17th century, to differentiate Morocco's flag from similar red flags of other nations.

Fun fact: The Moroccan flag remained unchanged when the sultanate of Morocco was restored by the two colonial rulers of France and Spain, and independence was granted in 1956. A year later, the sultan became a king and Morocco became a kingdom (source: worldflags101).